I’m well into my winter training now. After Florida I had a big break, around 5-6 weeks and I’ve got to tell you I lost absolutely loads of fitness. It’s actually quite amazing how much effort you have to put in to get fit and then you take a few weeks off and it’s all gone and you feel as though you are going backwards.

In previous years I’ve only taken around 2 weeks off and that felt like long enough but last year I had a very long race season and trained harder then I have before and by the time the end of the season came around I felt quite fatigued and was just coming down with the odd cold and such like. I have to admit it was quite nice to have a bit of time off and not have to worry about training, and just doing normal stuff but you do miss it.

Anyway back onto the training side of things and to start off my winter training the plan was to keep it predominantly steady until the new year and gradually build the volume up, especially with the running as I find the run sessions take a lot out of you with the impact so I the only hard running I did was a couple of x country running races and a 10 mile road run which were basically at threshold so not really intense running like you get on the track.

With the swimming I’ve actually started off swimming less this winter then previously as I felt that I was doing more swim sessions previously just because everyone else was doing 5-6 swims a week. I find when I swim that much that a lot of the time you can feel like your going through the motions a bit and swimming for the sake of swimming rather then swimming less and getting good quality swim sessions in.

With the bike before I started winter training I actually did a series of power tests on the turbo to see what level I was at and also to help me set training zones. Ive had a power meter since 2010 but have previously just estimated what I thought my FTP was from training sessions but this winter I thought I would find out exactly what it was and follow a proper training plan and see how it went. I started off just steady riding with the exception of the Sunday ride which was a bit more challenging with some efforts included in it and finishing the ride hard with a burn up. After a few weeks I started including a tempo session where I started off doing 2*20 minutes and have been adding 5 minutes every week.

Work on the Man Cave coming along nicely! So that takes me to where I am now. I would say that I’m finally into full training now hitting some intense sessions and getting faster each week. At the moment I’m currently doing:

Monday:
Long Run – up to 15 miles now (adding 1 mile a week until I get to 18 and then will access things)
Gym- Ab work with some leg exercises and balance stuff.
Pm- Swim Session with Jay main set is about 1600 meters but it’s intense.

Tuesday:
3 hours on the bike at a steady pace.
Run session in the evening with City of Norwich.

Wednesday:
Long ride in the morning.
Swim session in the evening doing fartlek stuff and strength stuff with paddles and a band etc.

Thursday:
Tempo Ride in the morning, I started off with 2*20m efforts and have been adding 5m a week and am now up to 30m and a 25m effort.
Run Session with City of Norwich in the evening.

Friday:
Very easy run in the morning and the gym, I focus more on the legs in this session.
Swim Session after, this one is more of a steady session.
Threshold intervals on the bike in the evening.

Saturday:
Swim session in the morning and that’s it.

Sunday:
Ride with the club, normally some tempo stuff during the ride and then finishing off at threshold with a sprint for the end.
Run in the evening, just at a steady pace.

To help me keep tabs of my training and help me to plan and monitor it I’m going to be using the Xhale training software. It’s been developed my Mark Livesey of functional fitness http://www.functionalfitnessevents.co.uk/ The Xhale training software is not actually live yet but from what I’ve seen and heard of it I think it will be very good for coaches and athletes of all abilities that want to monitor there training and take there performances to the next level. As well as this I will also be competing in the Rubicon middle distance race which is on the 31st August, this event looks fantastic with the race being on a fast course in beautiful Yorkshire surroundings. It’s also two weeks before Challenge Weymouth so will be my last hard workout and perfect preparation for this event.

Other then my training I’ve also been doing power testing on athletes. The testing involves doing a 1 minute test, a 5 minute test, and a 20 minute test. The aim of this is to get an individual power profile which can pin point where your weaknesses lie and identify the areas where you need to work on in order to raise your threshold and improve your time trialling performances. As a lot of people don’t have power meters we can work out individual heart rate zones which will be set by using power. This is a great way of training scientifically without spending a fortune. I’ve tested quite a few people already including myself and the results seem very positive at the moment. For more information email me at joeskipper@hotmail.co.uk

Below is an article of me which is in this months Triathlete Europe magazine: 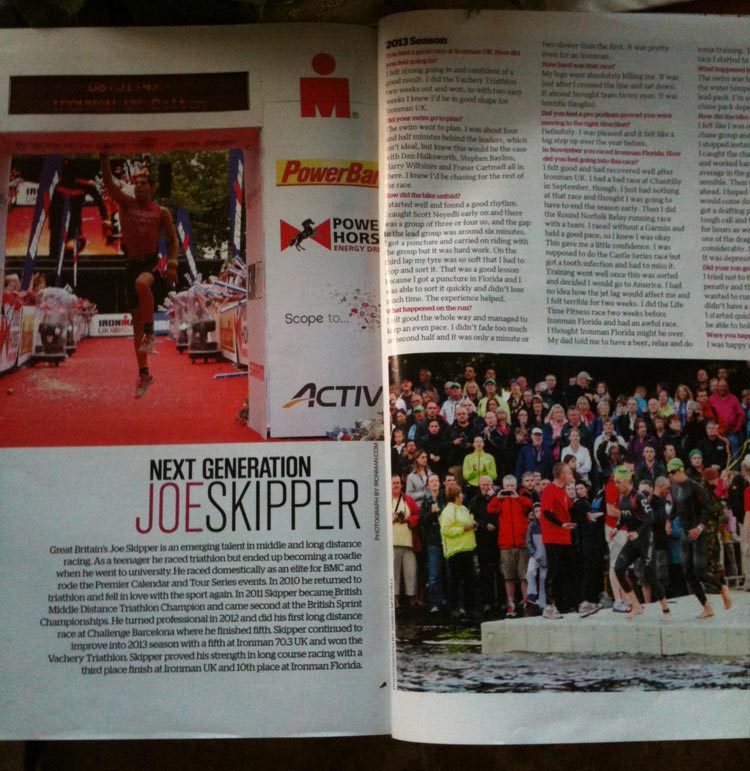