This was a big early season race for me, the aim was to win the race and to qualify for kona. Unfortunately I didn’t manage to win the race but I did manage to get kona qualification sewn up, which is nice as it means I’ve got the rest of my season to target some other events and can do a decent build up to Hawaii as well.

The swim at ironman Texas wasn’t great for me but it wasn’t the worst I’ve had. I had a good start initially and felt like I was in about 5th position but then it seemed about 3 of us came together and clashed and I ended up loosing quite a lot of spots and seemed to end up in around 12th position. This happens to me a lot in swims and I think I’m just not assertive enough at the start of swims and I seem to get bullied off the feet. Next time I’m going to stand my ground a lot more and keep the feet as like I say this happens a lot. 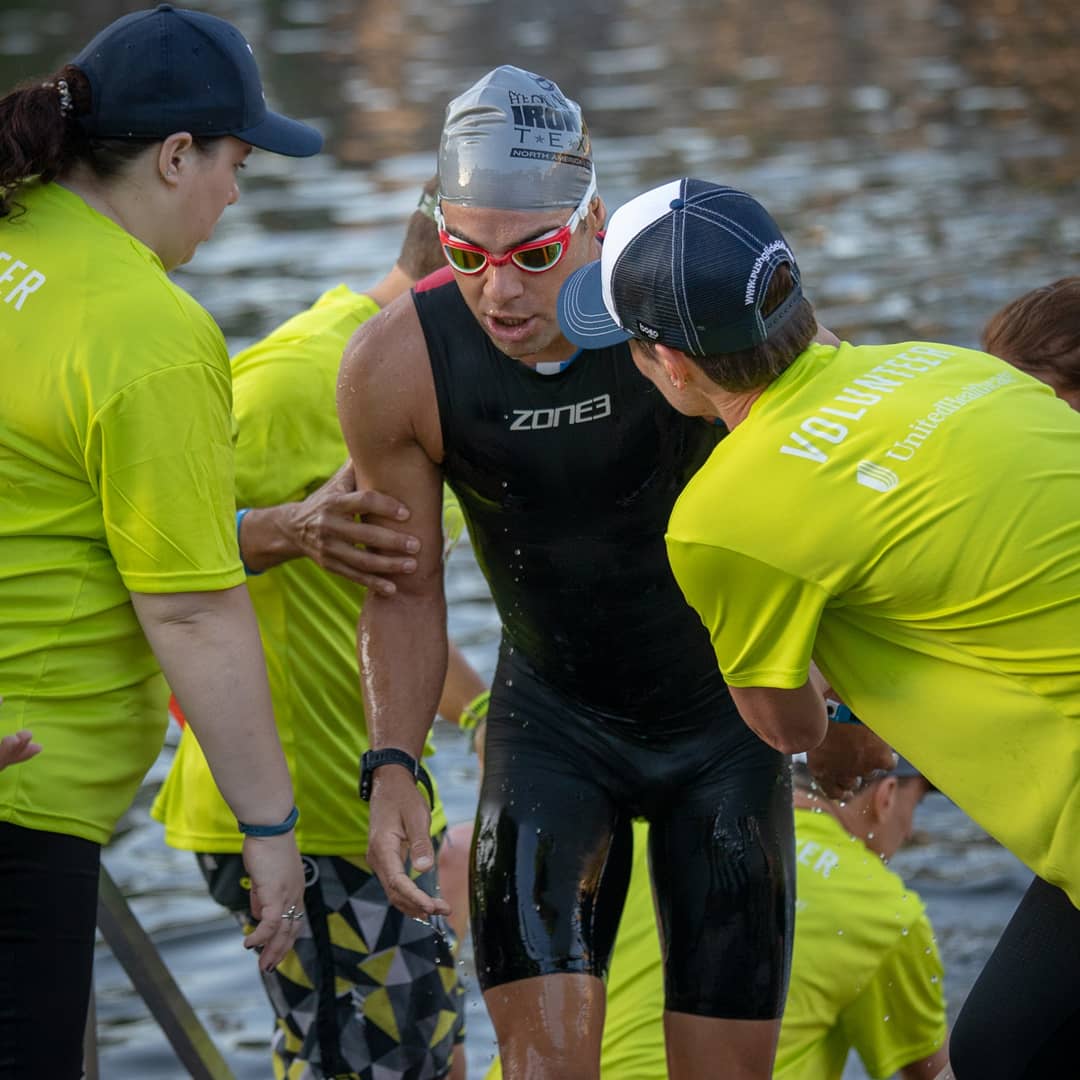 After that the swim was pretty uneventful with me just swimming I on Kyle Buckinghams feet. I think the swim must have been fairly fast as it’s one of the only races I’ve done where there hasn’t been any packs, everyone got out the water in ones and twos, I was in the first decent size group out of the water in 53 minutes, the fastest swimmer was 49 minutes.

Onto the bike and I felt great at the start, my power was good and my legs felt great. When we got to the first turn around on woodlands parkway after about 10 minutes I could see that everyone was quite spread out and I thought great, everyone is going to end up cycling hard and no one will be saving themselves for the run which is good for me as I was confident I could run well off of a hard bike ride. 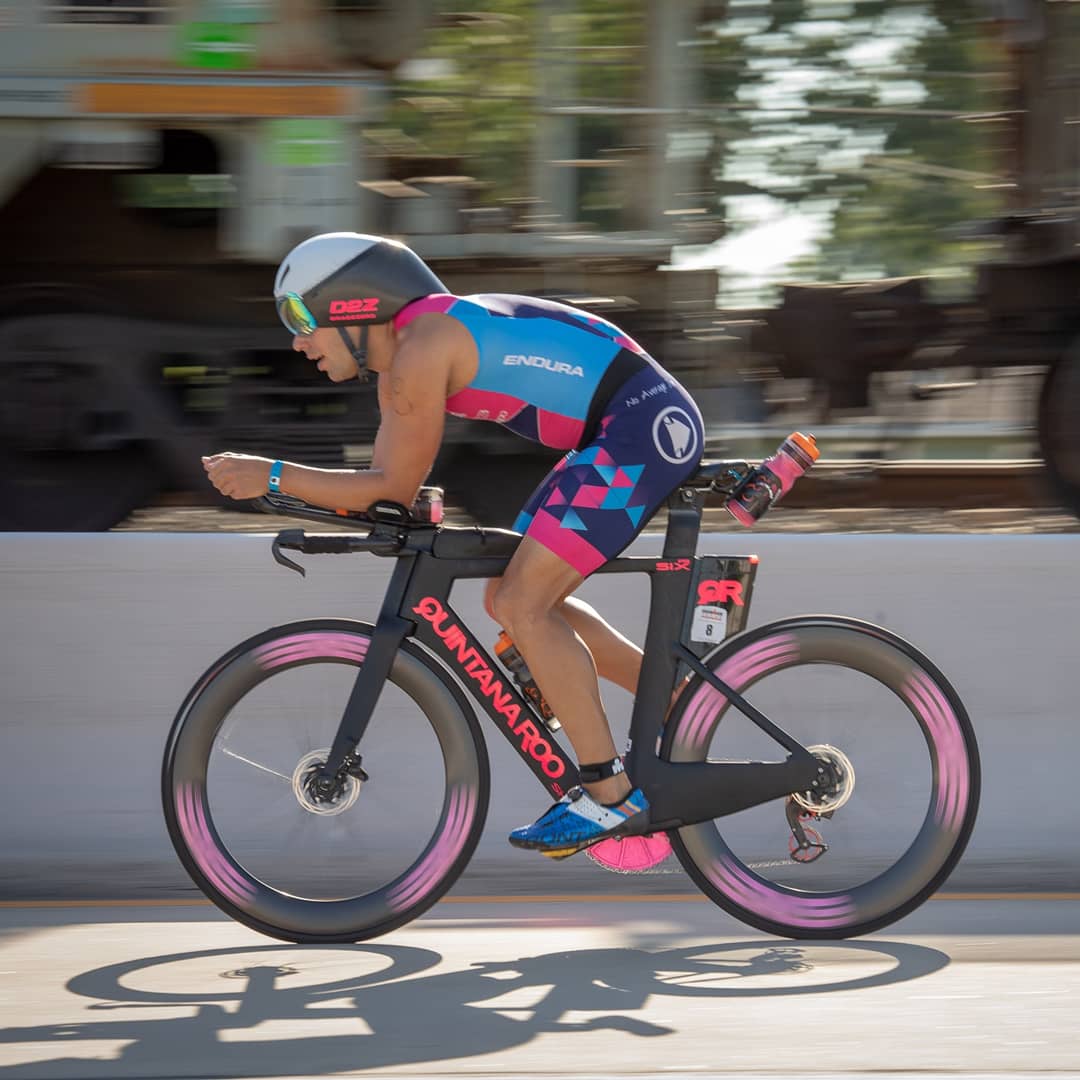 The only thing I was worried about prior to the race was my bike as I seemed to have tweaked it the week prior in the gym doing a deadlift. It wasn’t anything major but the day after I did it I had to stop a few times on a bike ride as it just felt like I had back ache on the lower part of my bike each side of the spine. On the Tuesday I went out for a ride and I could feel it after a while but it was much better so that gave me some confidence that it was getting batter and it seemed to follow this pattern leading into the race unfortunately I just ran out of time and after about 50 minutes into the ride on race day I could feel it. After around 80 minutes I took some ibuprofen and paracetamol which seemed to take the edge off it for a while but after around 2.5 hours it was pretty bad. I was constantly having to get out of the aero position and couldn’t put as much power down as I wanted to or could have done. I managed to get away from the Matt Hanson and  Kyle Buckingham group when Weiss came past after around 20 minutes into the second lap of the hardy toll which was probably around 110Ks into the bike leg. I saw Kyle left a gap to Weiss and I thought this was my ticket if I wanted to get a good result. I knew it was touch and go if my back would hold up but I thought I haven’t come here to get round, I came here for a result. I hung in there for around an hour until my back was really playing me up and then at that point it was damage limitation to get to the finish. I ended up getting passed by the Hanson/Buckingham group again and ended up entering transition 1 minute behind, loosing that 1 minute in the last 5k as I could barely push the pedals and only averaged 218w compared to a total ride average of 302w! 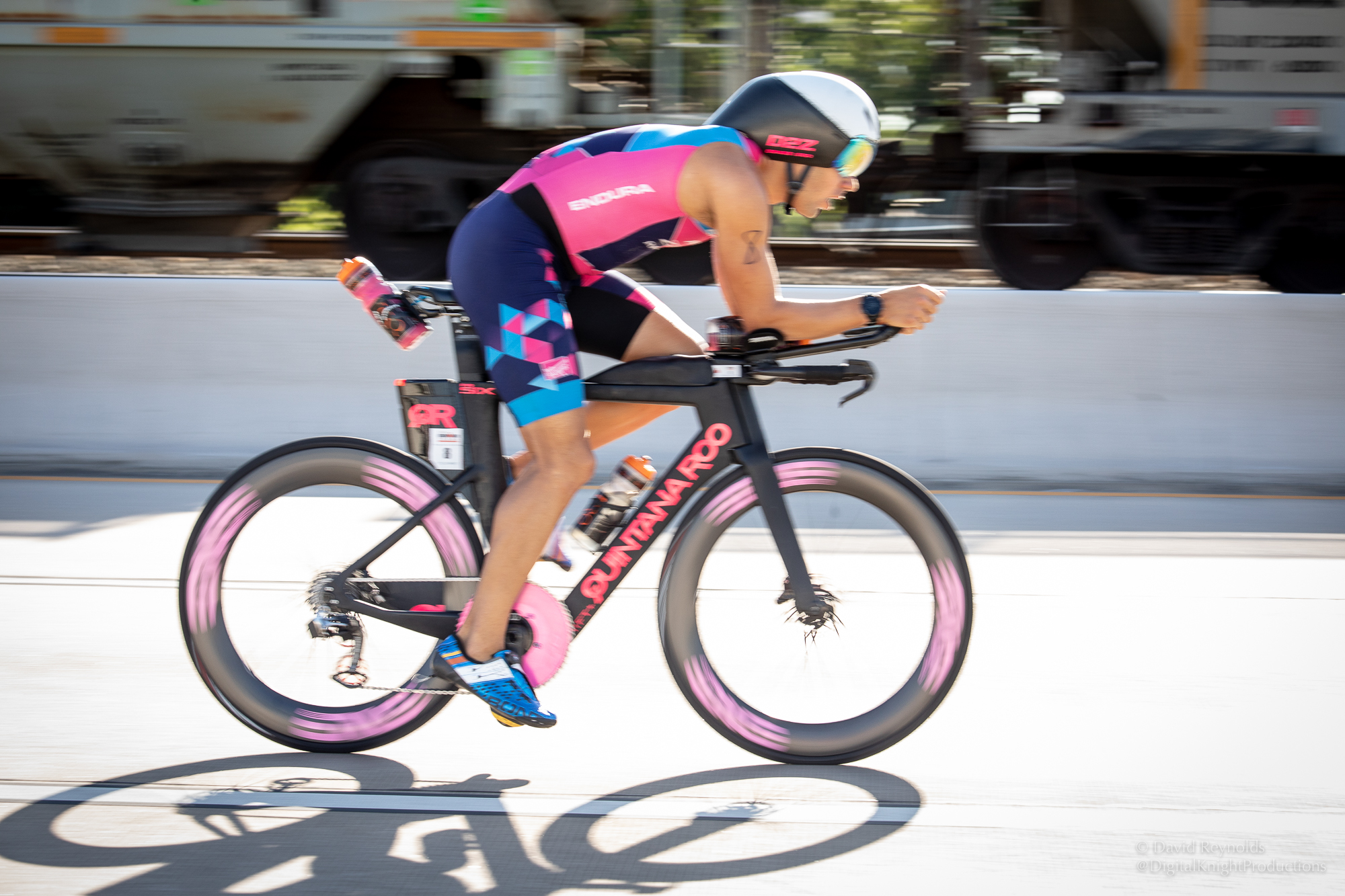 Off the bike and running through transition it felt hot, my legs felt absolutely horrendous and the thought of still running a marathon was the last thing I wanted to do. Out of transition and at the start of the run I thought about pulling the plug, I can’t blame my back as it was pain free while running, It was the fact my legs and body felt terrible and I couldn’t bare the thought of suffering for another 2.5-3 hours but these are the demons you get in every ironman, I think when you are in a really good position it’s easy to brush them a side or if you start the run feeling good you might not get them until 15 miles in to the race which at that point you can tell yourself it’s only another hour. 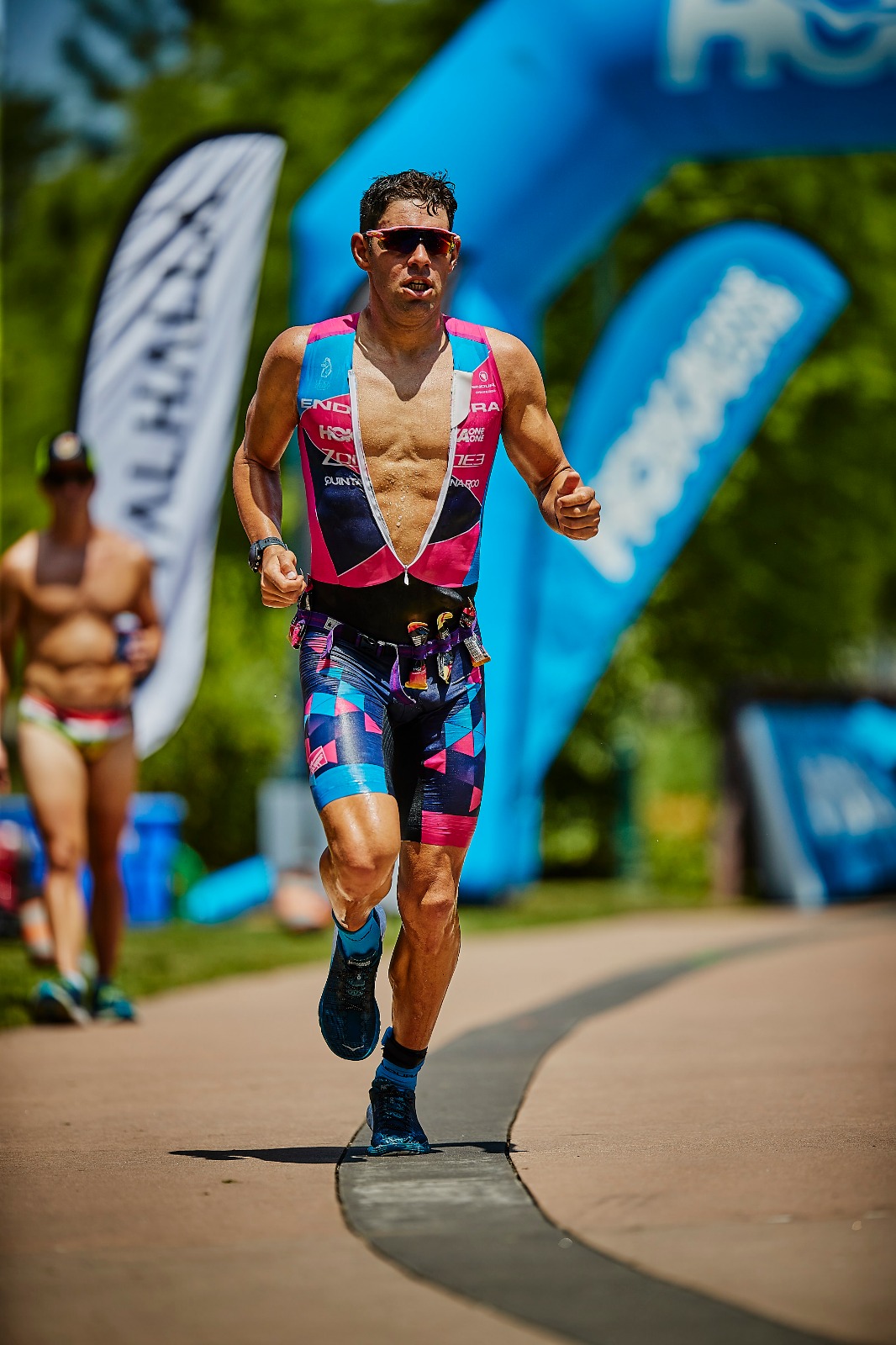 I just had to tell myself get to the end of the first lap and see how you feel. After the first lap I had overtaken a couple of people and actually started to feel a bit better. I could see Kyle Buckingham ham up ahead and could tell he had slowed a bit as he initially pulled away from me at the start of the run. He was now my target as my aim for the race had turned to getting a kona spot and with the new qualifying criteria it’s done by where you finish in an event and different events have different amount of slots. Texas had two for the men and two for the woman and then 2 bonuses ones which would be allocated depending on the ratio of male and females, I thought potentially the males could get the 2 bonus slots but I wasn’t 100% sure and I knew if I caught Kyle I would be 100% as he was sitting in the 3rd spot due to Starky and Matt Hanson who were ahead already being qualified. Back to the race and towards the end of the 2nd lap I caught Kyle and then on the last lap someone said to me “you can catch Matt he’s blowing”, I thought they were taking the piss at first as literally 2 miles before that I saw matt running about 4 minutes ahead of me looking fantastic. To my surprise about 2 miles after they said that I saw and past Matt and I said “what the hell are you doing Matt!” To which he replied something along the lines of “Ive blown mate but you can catch Starky” I think I then asked him how far Starky was ahead and he said around 4 minutes. ‘4 minutes I thought, bloody hell thats going to be tough but it’s possible if I go for it!’ I decided to get stuck in and see if I could finish on the podium, I had around 4 miles to go so had to take around 1 minute a mile which if Starky had blown was possible. With 1.5 miles to go it was down to 1 minute but I think Starky picked it up as when I saw him with about 1/2 mile to go he was still 1 minute ahead. Unfortunately I ended just off the podium in 4th but fair play to starky for holding on to 3rd. 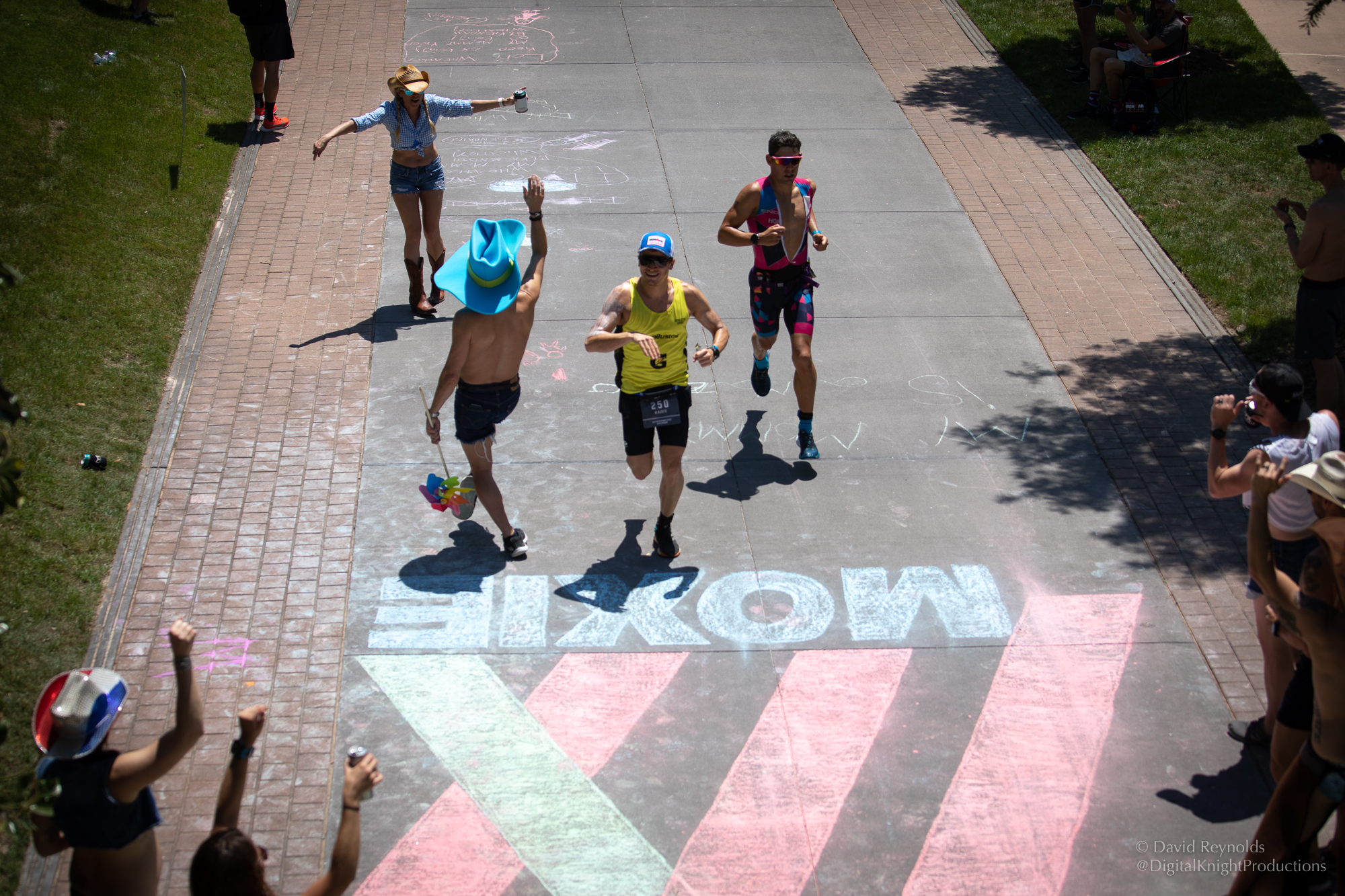 Moving forward there’s a couple of takeaways for me to improve on. 1st would be gym sessions, I’ve found them very beneficial to my training this year but I wouldn’t do it a week before a big race again as I think at that point the risk/reward just isn’t worth it so lesson learnt there. 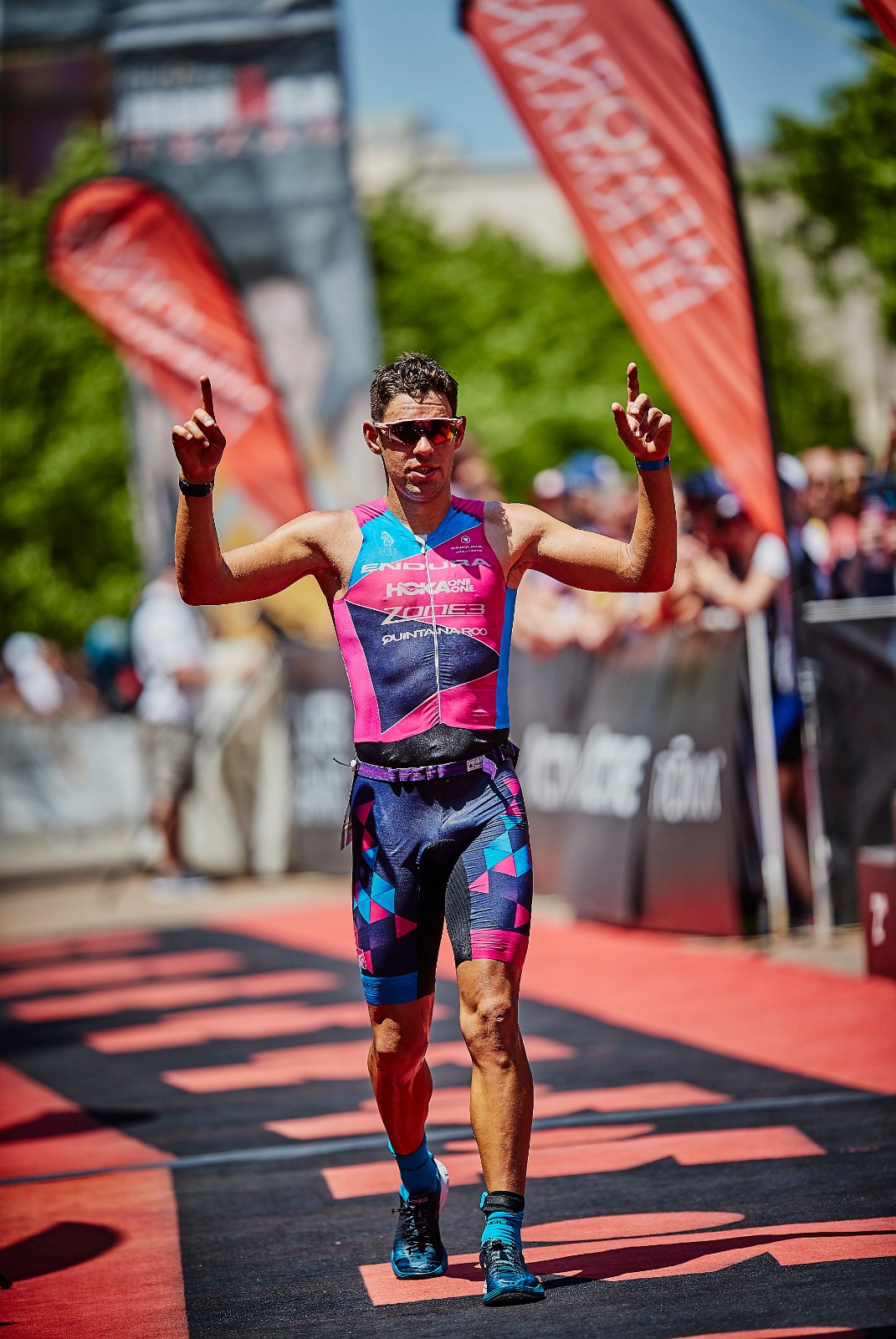 Secondly I’ve seen a lot of pictures from the bike course at ironman Texas and I want to fine tune my position. I think I’m loosing quite a bit of Freespeed at the moment and I want to be more aero. When I look forward my head sticks quite high so I want to address this and get a position where my head sits a lot lower naturally. I also see a lot of people that get bike fits where they look nice and aero on a stationary trainer but on the road they just can’t hold it. 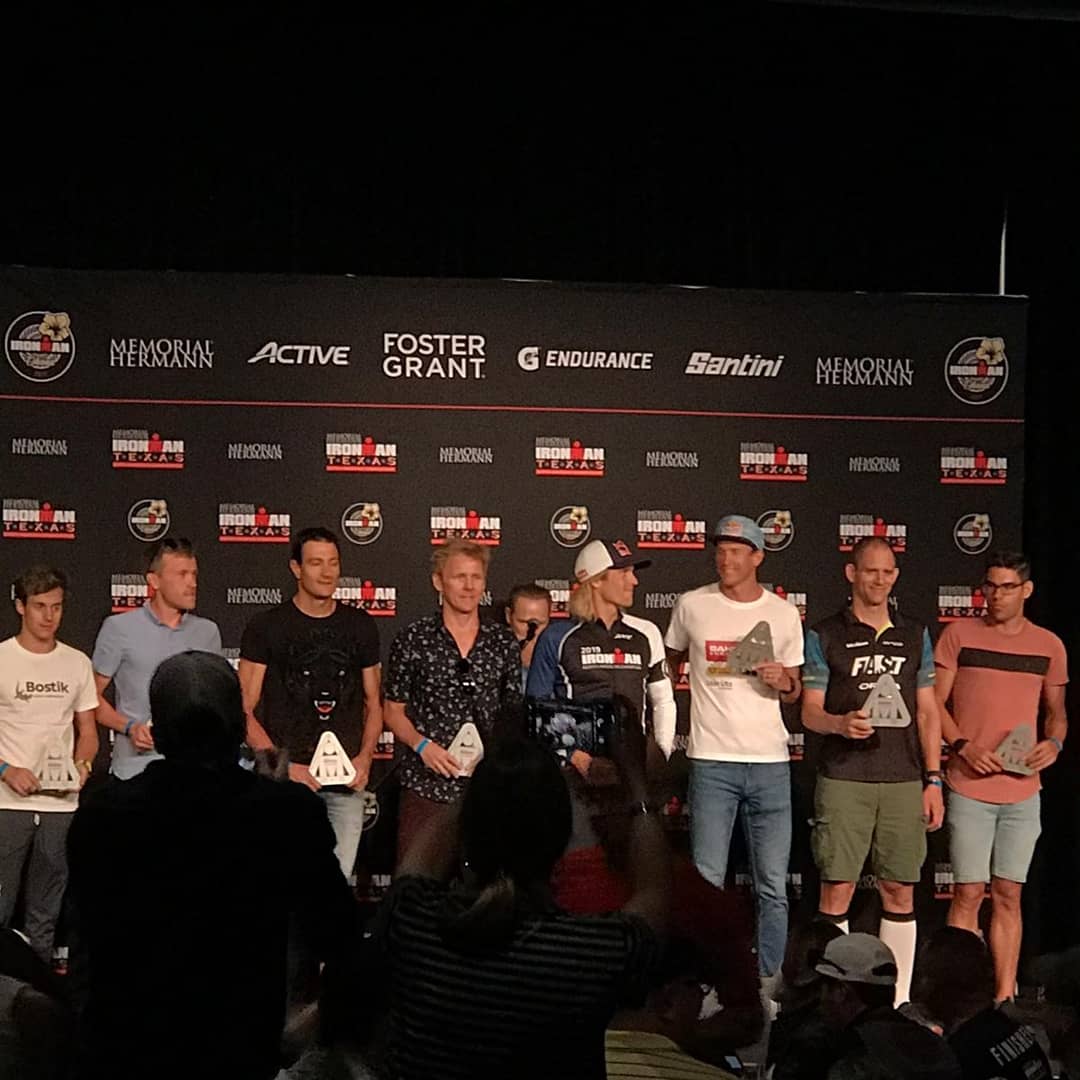 Next up for me will be Challenge Samorin on the 2nd June and then Ironman Frankfurt on the 30th June.

on another note I would like to thank Mike and Deborah for looking after me while out in Texas and for being great supporters on race day, I would also like to thank all of sponsors for the great support they give me and all the fantastic kit I have to train in and am lucky to race in/with. Also thanks to everyone for following me prior to the race and also the support and kind messages you have sent after. 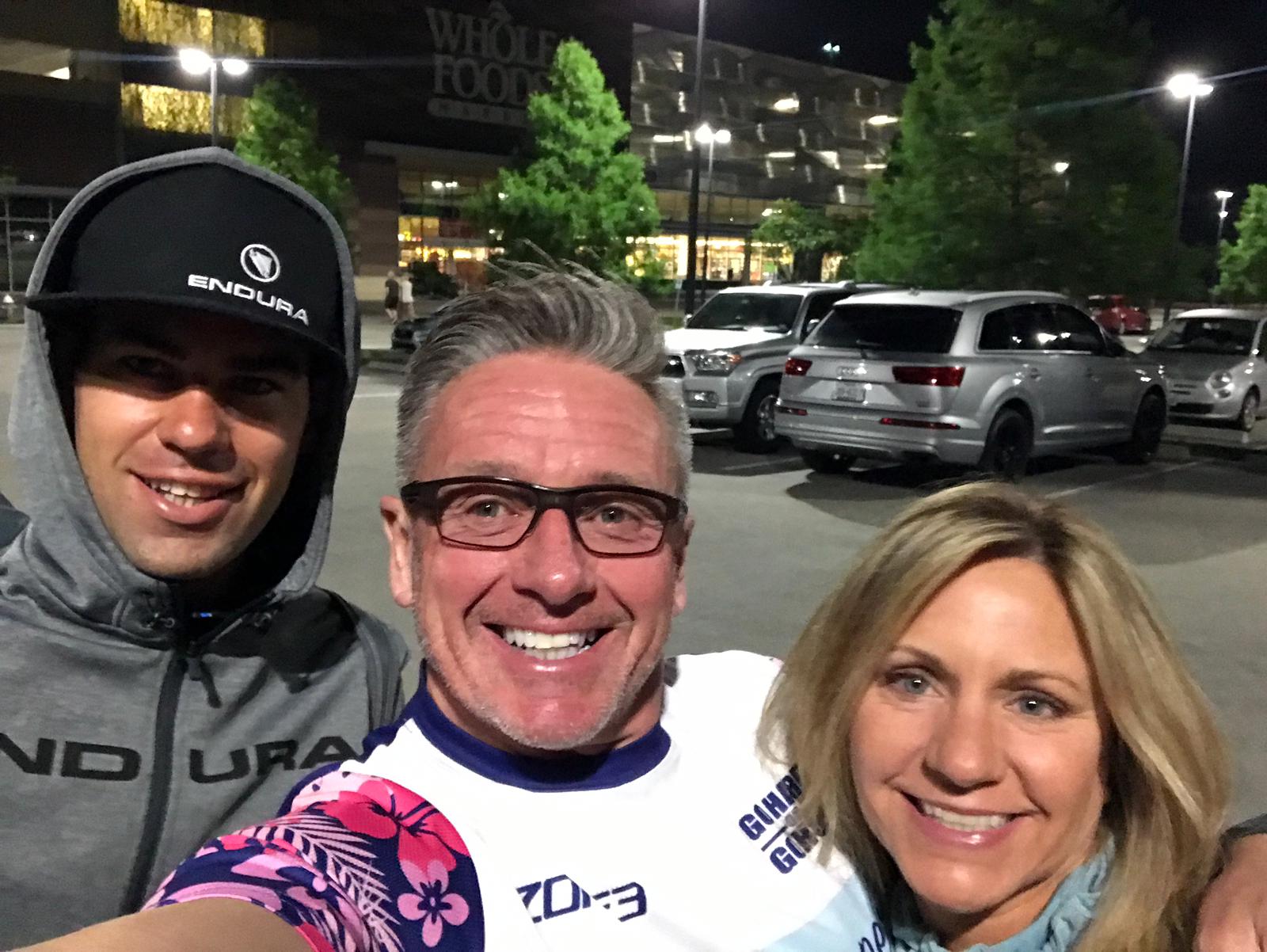 Had had to post this one up of my chief supporter for the day! 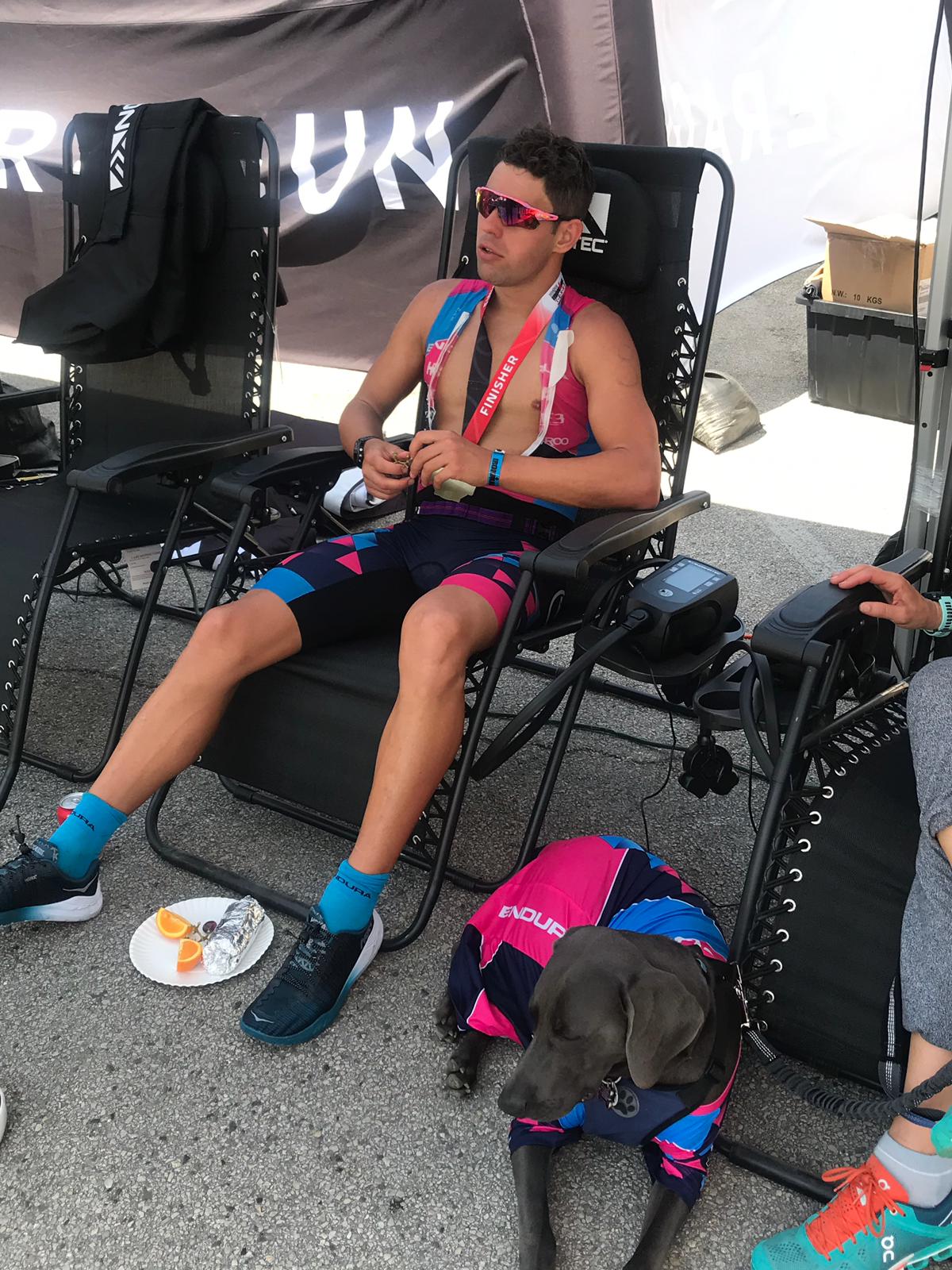