Where do I start with this one! First of all I would say the overwhelming feeling is relief, relief that nothing went wrong and that I was able to race to the best of my ability.

A lot of you that read this on a regular basis will know that on the 30th December I had a bike crash where I ruptured my ACJ and broke my collarbone, the rupture was very bad and was a grade 5 out of 6, according to the doctor I saw a 6 is the highest and apparently there has only been one case of a grade 6 in the literature when an elephant fell on top of a man!

The consultant I saw at the Norfolk and Norwich wanted to get me in for an operation to get a hook plate which I wasn’t to keen on as it would have meant 6 weeks in a sling before I could ride my bike and no swimming or running for 3 months! Not exactly the happy start to 2016 I was expecting! I decided to get a second opinion however mainly as the consultant from the norfolk and norwich failed to answer a lot of my questions and just didn’t fill me with any confidence in what was a massive decision for me to make. So I went private and saw a MR Titherleigh-Strong at Cambridge Spire, he was a cyclist and runner himself which gave me some confidence, he was really surprised by the amount of mobility I had managed to get 2 weeks after the crash and he told me not to get the operation as it might not result in a better long term outcome.

This filled me with confidence and a renewed hope that I would be able to compete in New Zealand, I knew it was going to be a long road to get there but I was just happy to know that I might be able to compete. I ended up doing all my cycling on the indoor trainer, for the first 3-4 weeks when I was unable to run. I was on the bike twice a day a  most of the time, thank god for Zwift otherwise I think I would have cracked. As my shoulder got better I went from the X- trainer to running on the road and with 4 weeks to go before Challenge Wanaka I was back to full run training. I thought I would take a gamble as I had limited time left so I upped my mileage to around 80 miles week including a couple of hard sessions ever week. I thought if I was going to be competing in New Zealand I didn’t want to be making up the numbers so I would gamble on doing the extra running. I didn’t start back swimming until around the 4th February and at the start had to begin with 1200-1300 meters of steady swimming and every other day. Leading into Wanaka I increased the volume of the swim sessions but still couldn’t do anything really intense. After Wanaka I added some more intensity into the sessions leading into Taupo. 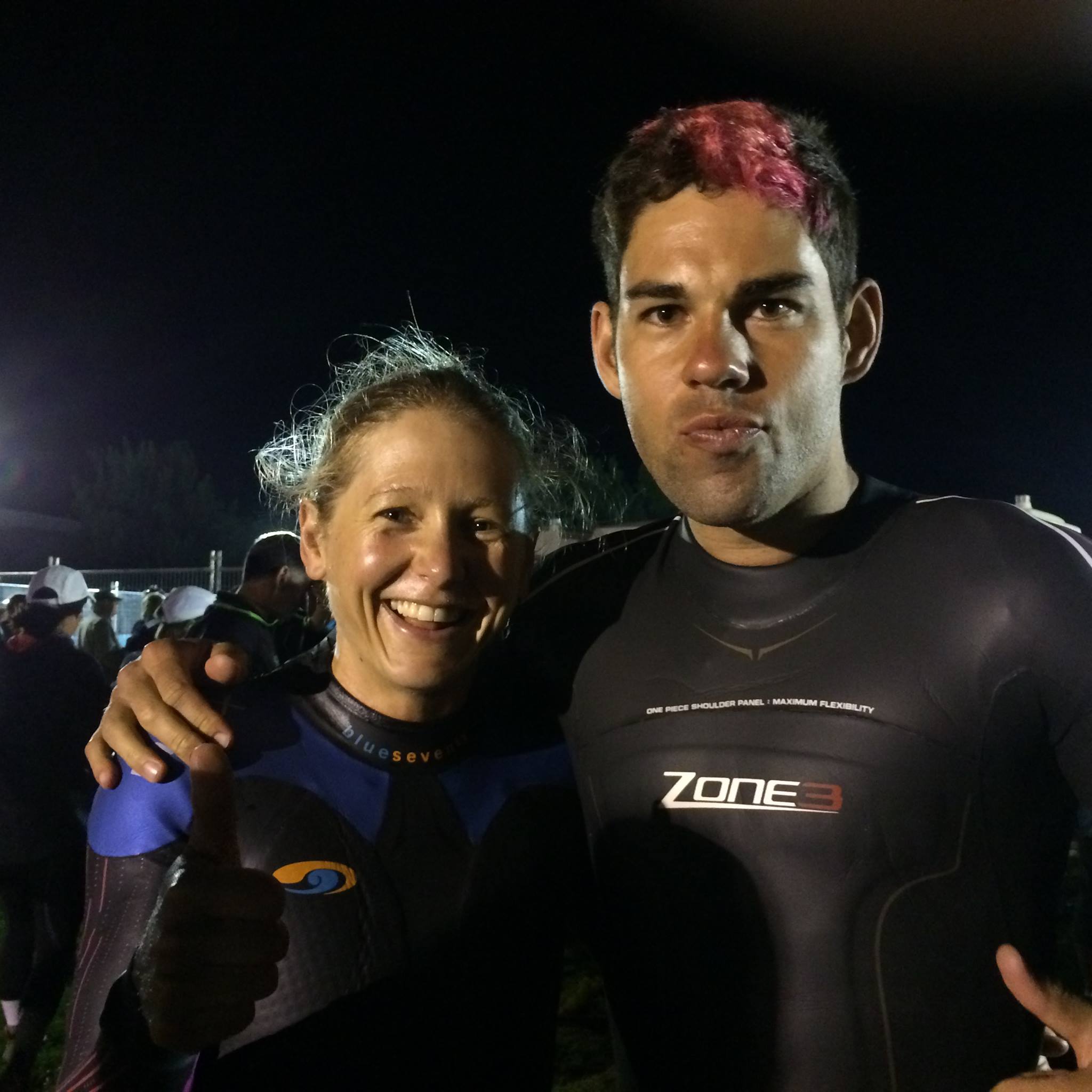 I had an alright swim, I mean considering the circumstances it was actually better then I could have imagined 3 weeks ago but I suppose the annoying thing is I put a lot of effort into really improving my swim this winter and in December just before I fell off my bike i was 5-6 seconds a 100 faster then what I was in the build up to Taupo, I suppose i should take confidence in what swim training I was doing as it’s certainly working but it does make me wonder how I would have gone in the swim had I not injured myself.

I got out of the water in 53 minutes something, I’m not entirely sure as my chip came off but I know I was with Brad Williams as he was just in front of me running up the hill to transition. I was 8 minutes behind Dillan McNiece and 5 minutes behind the pack with Cameron Brown in. 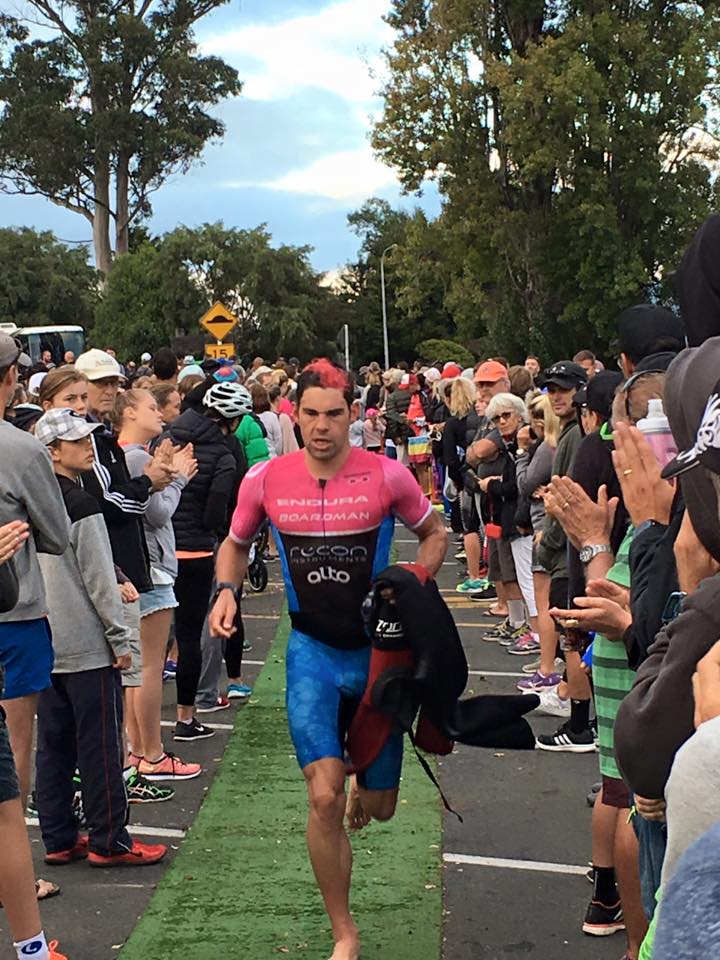 Out onto the bike and I instantly knew I would have a good ride as I could tell I felt really good and felt as if I was putting some good power down for very little perceived effort. My aim was to keep my heart rate around 150bpm and just hope that it would be fast enough to catch the guys in front. It was a pretty lonely ride if I’m honest as I didn’t have anyone else to work with the whole ride except for a very brief part when Dougal caught me with 35 kilometres to go. I said to him lets take turns, he did the first turn and then I did the next turn but unfortunately I went a bit hard and dropped him so I carried on at my normal pace and he caught me with about 1 kilometre to go coming into transition. I think had I of gone a bit easier and we worked together I reckon we would have caught the front group coming before transition. as it happened the front group of 6 arrived in transition 40 seconds a head of me with Cyril Viennot 2 minutes 30 ahead of them. 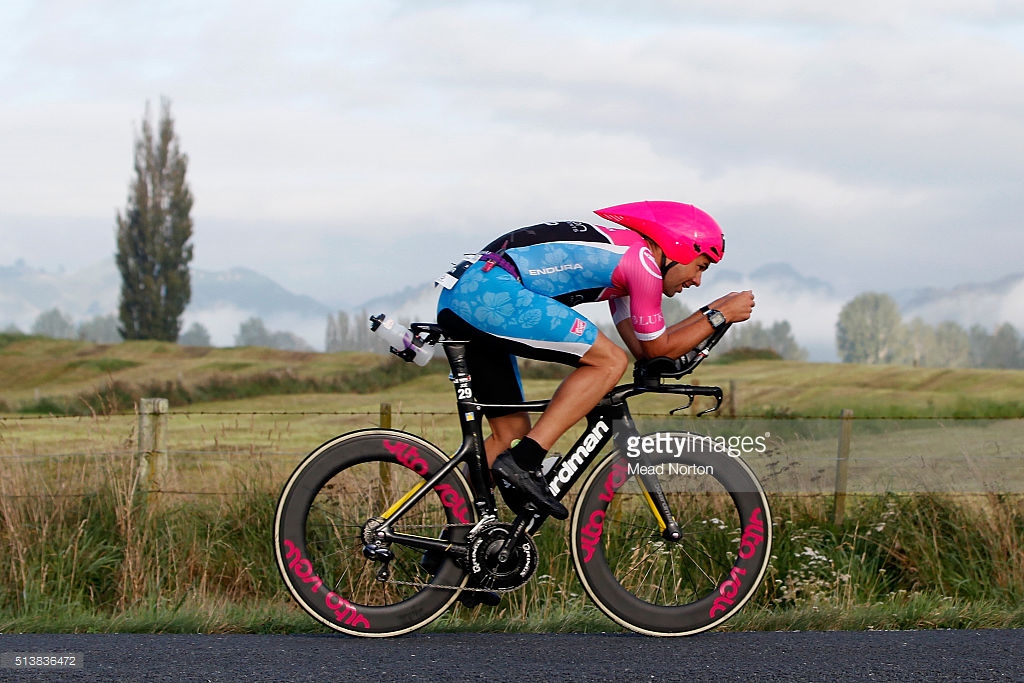 I didn’t actually realise they were so close as I could see them out on the road and when I was in the change tent there was only me and Dougal in there, it was only when I ran out onto the run course I could see them all just in front of me. It was a massive confidence boost and reassured me that the win was still on the cards was long as I could hold it together! It was so exciting as I knew it would come down to who could push themselves the hardest and ultimately who wanted to win the race the most!

Gradually as the run went on I picked them off one by one and worked my way up to 2nd place with 2.5 miles to go. Cameron Brown wanted it the most and won it for the 12th time by just over 90 seconds! I can’t tell you how many times I’ve gone through this in my head since the race wondering what could I have done differently and just wondering what I couldn’t manage to run sub 6 minute miles from the turn on the run course to the finish as that would have given me the win, I mean 6 minute miles isn’t really that fast and to become the champion of an ironman I keep thinking surely I should have been able to do it. Unfortunately I couldn’t do it and I become the bridesmaid yet again. Sometimes you have to take tip your hat and say well done you were better then me today and on March 5th Cameron Brown just had the edge on me! Well done to Callum Millward in 3rd as by the sounds of it he took the fight to Cameron and actually dropped him at one point on the run, he ended up with 3rd but so easily could have got the win and he had the balls to give it a go so you have to respect that! 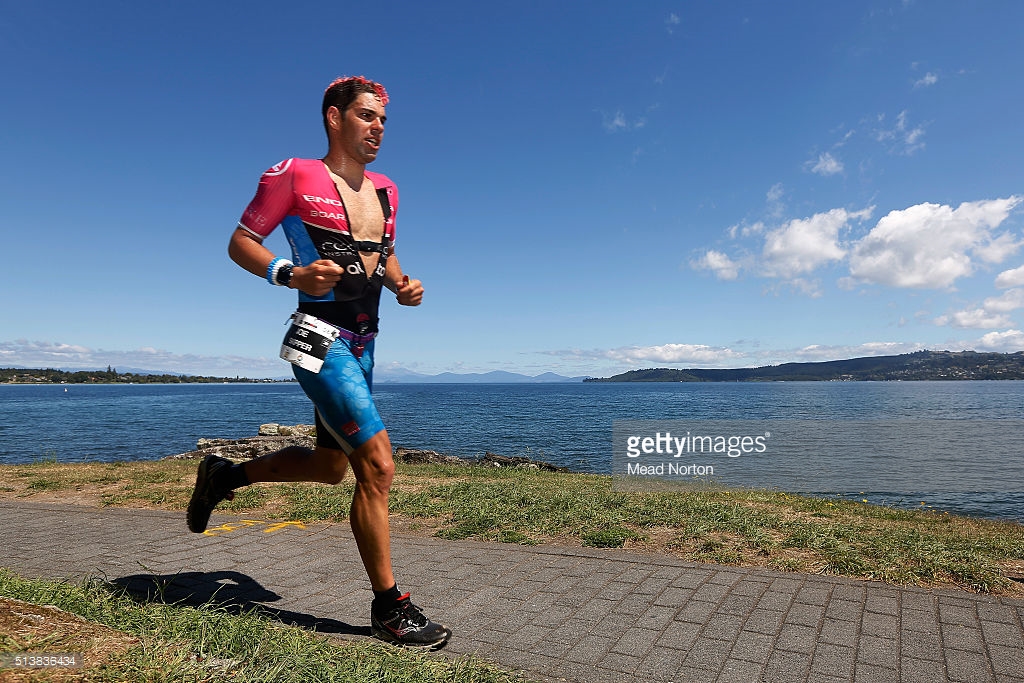 Also a big thanks to Matt Hanson who gave me a big kick up the ass going into the final lap when I saw he was only 3 minutes behind me and closing in on me! Looking back at my splits my 1st lap was less then 90 seconds faster then my last lap with my 2nd lap on the run just 25 seconds faster, a lap was 14 kilometres so a pretty evenly paced run in an Ironman. 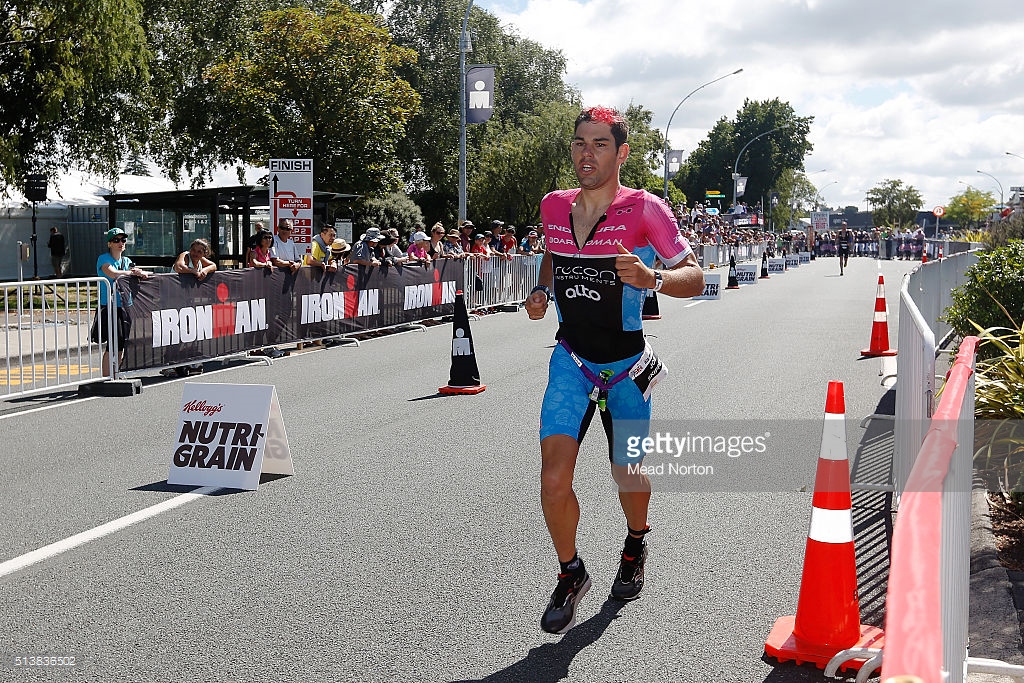 Overall I think I have to be happy with a 53 minute swim, a 4.25 bike time which broke the course record and a 2.45 run for a 8h 09 performance. I would have taken this before the race, 6 minutes off Bevan Dochertys old course record and now the 3rd fastest british athlete of all time. 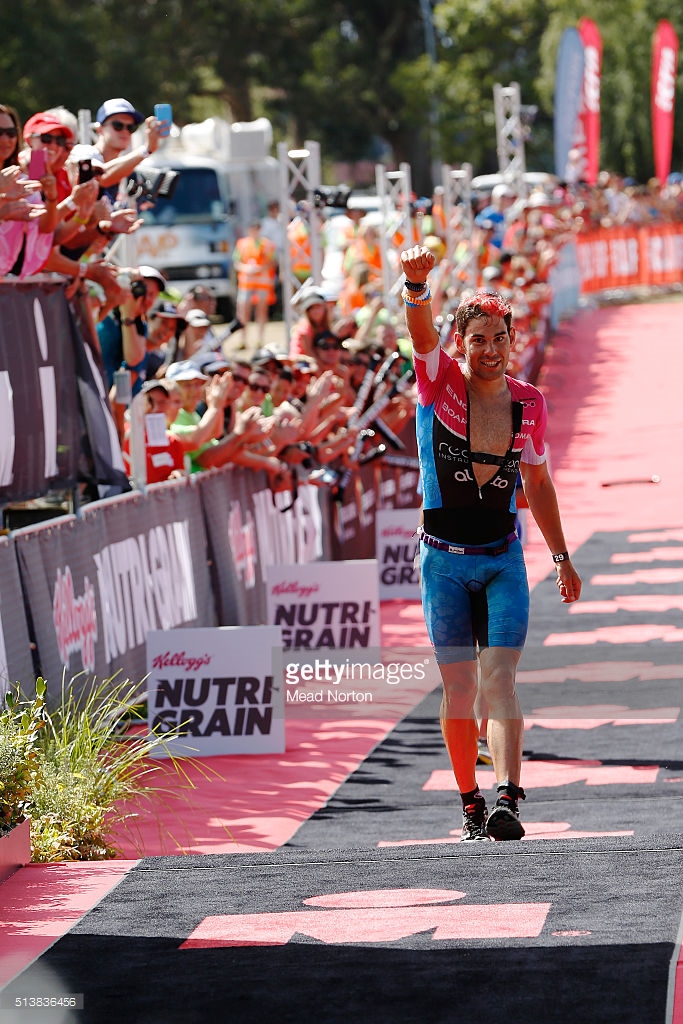 I want to just spend a bit of time mentioning my sponsors and how they helped me in this race:

Boardman- Fantastic bike, I was on the TTE and really like this bike. I’m looking forward to getting the new TTE as it’s supposed to be 1% faster, every little helps! And also for sending me a new road bike out here after all my problems with emirates. That was awesome for them to do that and really helped me in the lead up to Taupo.

Endura- Fantastic skin suits, the skin suits are part of the QDC range and have been tested extensively in he wind tunnel. They are extremely fast on the bike but are also very comfortable not just on the bike but also to run in. I see a lot of athletes now that wear a skin suit on the bike change into running gear for the run but theres no need to with this. Also thanks for Endura on the quick turnaround in getting my skin suit made in next to no time!

Alto Cycling- I use alto cycling CT86 Tubular wheels which are unbelievable. The most pleasing thing for me with these wheels is there’s no flex at all when riding hard an when cornering. The bearings and hubs are incredible as well, you should see the wheels spin.

TORQ nutrition- this was a huge help for me. I love the taste of the energy bars which for me means that I find it easier to eat the so I get a decent amount of nutrition on board on the bike leg for the run. Also the gells actually taste nice which has to be a first and I find they are a bit more diluted then some others so I was able to eat them by there self on the run which I would have never been able to do before.

Zone 3- thank god there wetsuit is fast, it kept me in the race after my lack of swimming in the build up. I’ll be in there new wetsuit after this which is good as I’ll be able to do it justice in Roth!

Recon Jet- although I wasn’t able to use these glasses for the race training with them has been very beneficial. The come into there own when you are holding a really aero position on the bike as you don’t need to move your head at all to see your power/ heart rate data like you would need to with a normal computer.

Luke1977- Have to thank Luke for enabling me to be the best dressed on the podium!

Thanks also to my aunt Janice who was with me for the whole month and gave me the ‘pro treatment’ looking after me, massive help and I don’t think I would have been able to do it with out your help. Also thanks to my Mum, and Dad for there support and help, my girlfriend and my mates back home who kept inspiring me with confidence after Wanaka and believed in me leading into this race even if a lot of the triathlon media didn’t again! 🙂 Also thanks to everyone for following me and being a part of this it really does motivate me to leave it all out there on race day and I’ll always give it my all from the moment the gun goes to the moment I cross the finish line. You either win by the biggest margin possible or loose by the smallest! 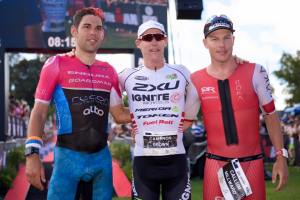 So on from here I’ve pretty much got kona Qualification sewn up so I’ll definitely be racing there in October, in the build up to Roth I’m looking to do the following events:

As well as these I’ll do a lot of local time trials and running races, if you see me there don’t be afraid to come over and say hi, I’m just a normal person and I don’t bite, much!