This Sunday I competed in the BDCA 100 mile time trial, this time trial came after 5 weeks of good training and the plan was to hope that I felt good in the time trial and just give it what I had and then go for a run no matter what, I knew I wouldn’t want to go for a run after the time trial but I knew it would be good training and the fact that I had said I was going to do a run after on a pre ride video meant that I had no choice as people would be asking me how the run went and I didn’t want to tall them that I was to much of a pussy and that I canned it!

My general plan over the last 5 weeks has been two hard swim sessions a week, 2 hard bike sessions, one on the turbo and one on the roads, as well as one long ride. And with the running I do one track session, one long run and one run off the bike which is pretty hard, that’s actually a really brutal session as it’s after an interval session on the bike so your legs are like jelly once you’ve finished and then your trying to do 8-10 miles of hard run efforts! Great fun though and it’s definitely harder then a race so you get a real sense of achievement if you make it through the session! Luckily I do the turbo with a few guys, and then meet a group for the run session which I set.
As well as this there’s all your normal steady rides and runs which form the bulk of the week.

Back to the time trial and my legs didn’t feel good but they didn’t feel bad, this was such a relief as the afternoon before the time trial I went out on a ride and wanted to put a 5 minute effort in at target 100 mile time trial power, so a very easy effort on paper, I literally managed a minute, felt terrible and just carried on riding steady back home. I did think after this how am I going to get through the time trial tomorrow but I knew the motivation of being in a race would help and also after speaking to Lucy Gossage it helped as she seemed to reckon that as we were both in a big training block what ever power we managed to hold for the time trial was what we would be able to hold out in kona when were tapered and feeling good. This put my mind at rest and I thought that I only had to hold 310w and it could be classed as a successful session.

The time Trial was rather uneventful as obviously you start off at one minute intervals so you don’t see many people except when you catch someone. The course was pretty fast although the drag which you had to go up twice did take me by surprise as I wasn’t expecting there to be a hill on the course. 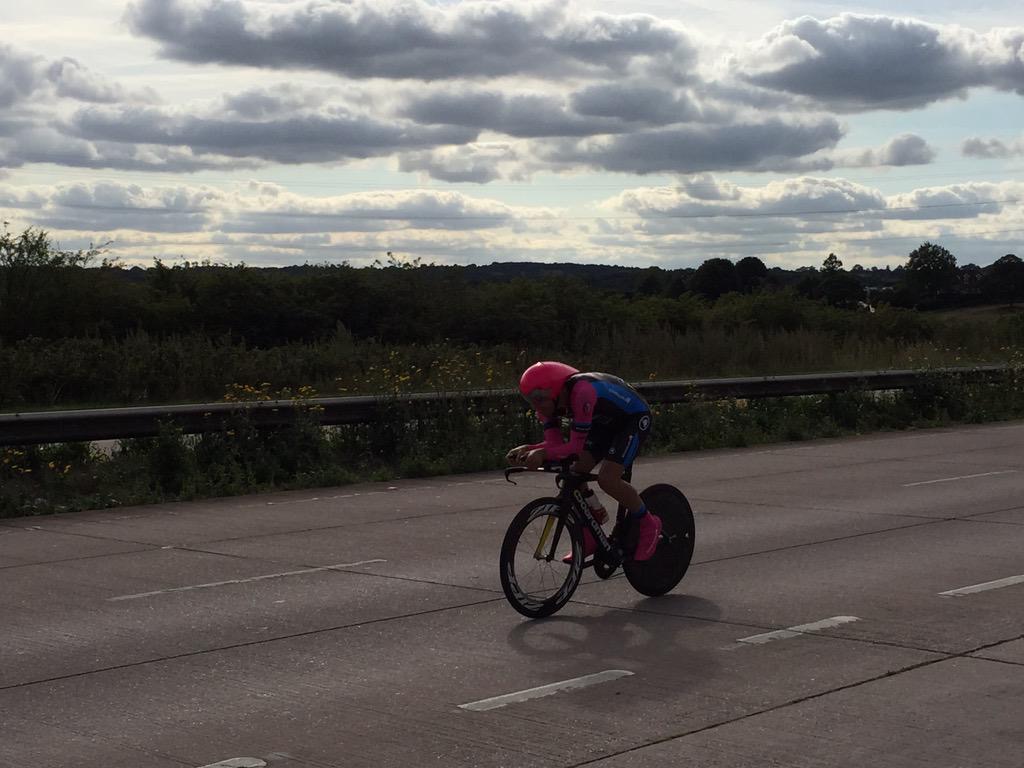 I managed to hold 311w for the first lap which felt horrendous, I didn’t feel good at all and felt like sacking it off so many times but I knew my Dad had gave up his whole day to drive me to the time trial (6 hour round trip) and was going to go on the bike next to me when I do my run and I would have jus felt so bad if I had of gave up, plus I hink when your struggling you always get these demons and I think the practice of overcoming these is just as important as the physical gains you get from the effort.
Over the course of the second lap I averaged 312w and felt much better, also knowing the course helped I think as I pushed the hills harder and went easier on the descents which actually resulted in me riding the second lap 2 minutes faster then my first. I think my first was around 1h47 moving time and 2nd was 1h45, I did have to stop for a piss on the second lap as I was absolutely busting and I just can’t bring myself to piss myself in a training race!
Normalized power was 316w for the duration of the time trial.

After I finished the time trial I was riding back to the car park which was literally a mile at most and I felt pretty bad, I think the effort actually hits you after you finish as I was thinking to myself how am I going to manage to run 8 miles. I thought I’ll start off and see how I feel, I did want to run sub 6 minute miles but really couldn’t see it happening with how I felt! My dad found it quite funny as he was just smiling while I was moaning, I think he was probably thinking “stop making f*****g excuses and just get running” . Anyway I started off and went through the first mile in 5m 55 and actually felt really good, I ended up averaging 5m 59s and it felt very comfortable which was a really nice surprise.

Here’s a couple of videos from my day:

Before the drive up

After the time trial