Ironman Texas for me was a make or break race not getting a result wasn’t really an option as my finances were running dry and the day before I was due to fly I actually nearly called off going there, I was looking at booking a hire car and I couldn’t believe the price, I considered staying at home and racing Ironman Lanzarote as it would be much cheaper then going to the states but luckily my main sponsor stepped in (Mum & Dad) and got the hire car for me. So Texas was back on again and I got my packing done. 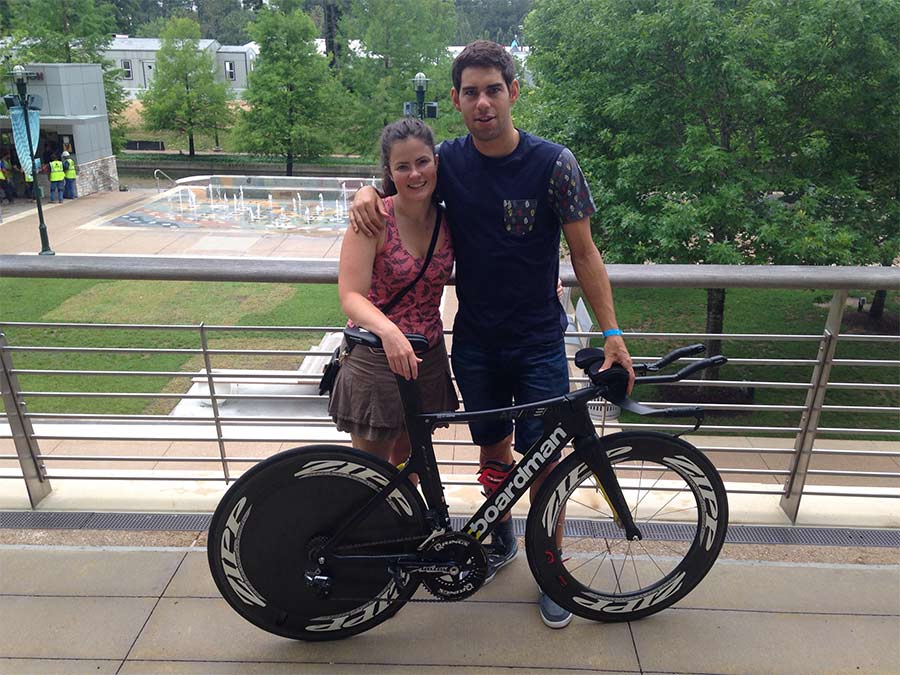 Leading into the race I knew I was going to have a good race as on the wednesday before the race I did a session which was 1 hour with 30 minutes at Ironman pace and a 5k tempo run off the bike. I felt fantastic for the session and it felt very easy I was having to force myself to slow down as I knew I would end up screwing my race up. The weather had completely turned and it was like being back in England with it absolutely p***ing it down only it was 25 celcious and not 10c. The session I did is below:

Friday before the race me and Matt Hanson did a swim session together. 6*100 yards off 1m 50. Tim the coach gives you hold paces which you have to target. These hold paces I can only describe as a pace which is pretty brutal to hold but if your up for it you can hit it with shortish rest (20s for 100). At first when I started doing these sessions a month before I wondered what the hell I had got myself involved with. Anyway when I got there my target was 1m04s and I would normally blow up, I did a set which was 3 sets of 4*100s and I probably averaged 1m04-1m05s for these. The day before the race I was hitting 1m00/1m01s and I felt good, a drastic improvement and a bigger improvement in the 5 weeks I was out there then what I have had in the previous year!

Here’s a video which was on my facebook on the morning of the race.

I want to thank Bikeland for servicing my bike and making sure everything went ok as on the Thursday when I went out on my bike it was working fantastically yet on the morning of the race I decided to go for a spin on it to make sure it was ok for my own peace of mind and disaster struck. The bloody brakes at the back were rubbing! I couldn’t believe it, if anyone has a bike with integrated brakes you will know how hard they are to adjust. I have tried before but ended up completely screwing it up so I thought I would get a mechanic to do it at transition. I got the bike in the back of the car and Laura was getting all panicky and thought she was a boy racer the way she was smashing it away from the traffic lights! I actually had to say calm down. Anyway we got to transition and I said to the mechanic the back brakes rubbing, he put the bike on a stand, checked how the wheel was in and spun it and it seemed ok. He said the wheel wasn’t in properly but it did spin alright when he did that so I racked it. Luckily the guy who was pairing our GPS devices up spun my wheel and it was rubbing he said he would get a mechanic so another mechanic had a go at sorting it out. The time now was around 5.30 and I started at 6.25, he said go and put your bags in transition and I’ll sort your bike out. Ok I thought sounds good. I came back the bike was in transition racked but I thought I’ve got to check the wheel to make sure, I checked it and it was still rubbing. I found him again and just said mate loosen the back brake off a bit I don’t care if it’s not too good as long as it doesn’t rub. The time now was getting close to 6am and I was still in transition. All the other pros had left and there weren’t many age groupers even in transition. I think by the time my bike was sorted and I left transition it was around 6.05 and I had to walk (run) a mile to get to the swim start. I ended up getting to the swim start, zipped my suit up, swam over to where everyone was did 2 short sprints and then they said 1 minute to go. I was wondering if I was even going to make the start at one point! In the end it was all good and I felt good in the water!

Here’s a video about 10 minute after I crosssed the line:

And als0 a link from TRI247 it’s a brilliant one highlighting my race: Tri247 – Analysis: Joe Skipper’s Ironman Texas

Just want to say a massive thanks to Scott Neyedli who let me stay with him for the duration of my stay. It wouldn’t have been possible with out his generosity!